FIRE AND ICE AND ALL THE SPICE - ICELAND 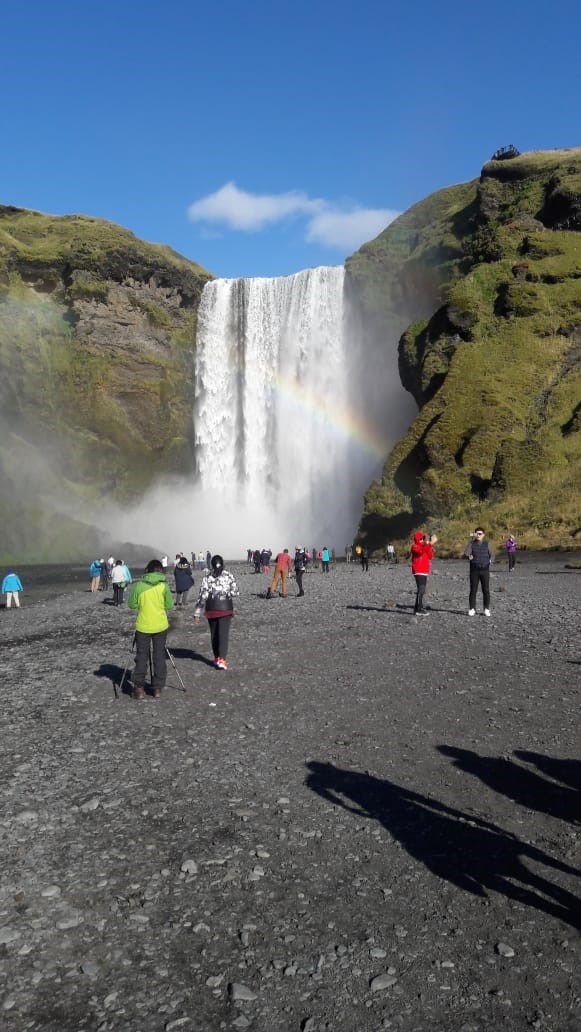 FIRE AND ICE AND ALL THE SPICE - ICELAND

‘Living a dream is the most thrilling adventure ever’, this phrase just sounds perfect to me cause traveling to Iceland was one such dream of mine which turned into an adventurous reality for me. It was the best & a most memorable ...

I took a Brussels Airline flight from Mumbai, had some 5 hours in hand because of the layover, so decided to explore the city of Brussels. The city of waffles, chocolates and diamonds. I kept my luggage at the airport and took a public bus to the City Center, then walked around gazing through the city for almost 3 hours. I also tried the local waffles and some authentic French ice-cream which cost me less than 5 Euros.

Later I visited the Grand Palace (one of the most beautiful squares in Europe) and Manneken Pis (a small bronze fountain statue from the 17th century). After spending some quality time at Brussels city I took a train from City Centre to Brussels Airport. Was hungry by the time I reached the airport so I had a local sandwich and Stella beer for lunch before boarding a WOW Air flight to Reykjavik.

On my arrival at Reykjavik i.e. the capital of Iceland and after clearing immigration the first thing that I bought myself was an Icelandic Krona currency card as Euros are hardly accepted here. After purchasing a Flybus ticket from the airport I hopped into this airport shuttle which directly dropped me to the City Center. Later I had to take a local cab to my guest house; the fare was a bit expensive.

I had booked a single room for myself at a guest house named Captain Reykjavik which was pretty neat and clean, they also served some healthy breakfast. Everything was at a walking distance from my guesthouse including the most entertaining nightlife at Laugavegur Street and main city centre attractions. There were a lot of dining options available including Indian and Pakistani restaurants along with multiple local and Icelandic restaurants.

I had planned my tour somewhere in the middle of September which in a way was quite a blessing for me as the chances of witnessing the Northern Lights are usually very high. I was lucky enough to see them during my very first attempt of Northern Light Hunting Tour. I later also got to see it a couple of more times in Reykjavik City itself without booking any tour.

The days in Iceland are usually very short of around 8 to 9 hours. It used to be quite dark even at around 7:30 am in the morning and in the evenings by around 5 pm. The weather was quite unpredictable because at sometimes it used to be cloudy, at times windy or even stormy. I experienced a good amount of rainfall too during my overall stay of around 12 days. Being an Indian these fluctuating weather conditions were all new to me, so my biggest challenge was to move about and explore this new place and complete my Iceland tour within the limited daylight that was available.

I did the Golden Circle Tour which is one of the most popular tourist routes in Iceland. On this tour you get to see geysers, active volcano mountains, incredible waterfalls, a stunning national park and some of the most spectacular natural wonders in Iceland.

I first visited the Thingvellir National Park which is situated in a rift valley where one can see the effects of the continental drift, where the North American and Eurasian tectonic plates drift apart nearly 2cm each year. This park has also been named as a World Heritage Site by UNESCO.

My next stop was the giant Gullfoss Waterfall, a massive two-tiered waterfall in river Hvita. The waterfall is stunning to see both in summer & winter. During summer the waters are blue and green, in winters the water freezes over and creates breath-taking waves of ice.

I stopped at one of the cafes around Geysir and had a local European style pizza. I guess this is the only place with good dining options during the Golden Circle tour. I then continued with the tour and visited the horse farms and sheep farms along the route. A day well spent, this Golden City tour has been a real memorable one.

Reykjavik a quaint, relaxed city by day, it transforms into a thriving nightlife capital at night. There are many clubs and bars to explore which get very crowded especially during the weekends. The Icelandic craft beers offered in its many bars are a must try.

This was not a leisure trip but an official trip for me so there was a lot of office work to be completed. After having completed most of it which took almost 4-5 days in Reykjavik I got some free time to explore the South Tour of Iceland. That day was like a great expedition for me as it involved a lot of walking, but it was all worthwhile as I got to see nature at its best.

My first stop was the stunning Skogafoss waterfall, one of the biggest waterfalls in Iceland, with a drop of almost 62 metres. It was just overwhelming standing next to it. They say you often get to see two rainbows at this waterfall and yes the saying is very true as I did see the rainbows myself. I also climbed at the top to get the aerial view of the same, a stunning beauty to experience.

Later I headed to the Seljalandsfoss waterfall. The most distinguishing feature of this waterfall is a pathway that stretches around it. The cliffs behind the fall have a wide cavern. A mesmerising opportunity which I just could not miss: a cave behind me, the waterfall in front of me alongwith a rainbow another masterpiece of nature.

Later we had a coffee stop at one of the farmer’s house followed by the main attraction Reynisfjara, a world-famous black-sand beach with enormous volcanic formation of basalt stacks. This beach is just beside the small fishing village of Vik-i-Myrdal.

The next 2 nights I stayed at Katla Hotel Vik. Unfortunately I was unable to explore the place as everything was closed due to the big storm which had hit the Southern part of Iceland. Storms here are quite destructive. Iceland is very prone to a lot of natural calamities like volcanos, floods, storms and much more. I experienced a few on this tour.

After I checked in at the hotel I explored the property and enjoyed some time in the open air thermal hot bath tub located inside the property. Later in the night I had a buffet dinner at the hotel which also included the traditional horse meat. But since I was in no mood to experiment with the food I opted for my favourite chicken dishes, salads, pizza and pasta.

Next day post breakfast I managed to get a lift from one of the hotel staff who dropped me at Vik town. I decided to explore the entire town on foot. A very ancient and marvellous town, I visited Dyrholaey point formerly known by seamen as Cape Portland. Then I went about exploring some of the local houses from outside and a local horse farm which was managed by a German lady. She gave me many useful insights about the town and its various tourist activities. Later I had lunch at a small bistro style cafe. Post that I requested one of the locals at the pump station to drop me back to the hotel; he was very kind enough and willingly helped. The rest of the day I hung around the hotel and got to know more about the country and the daily lifestyles from the hotel staff who were very friendly.

The next day I headed to Vatnajokull Glacier which is not only the biggest glacier in Iceland, but in all of Europe. Enroute I did Glacier boat ride to see some natural ice formations and Diamond Beach followed by the unforgettable adventure of the glacier jeep ride tour. This was very thrilling, as at the top of the flat mountain all I could see was only white snow everywhere. I was all covered up with proper clothes and shoes as it was raining and very cold as well. But yet I decided to spend some more time with the guides as I knew that this time would never come back soon. Something similar like sand dunes but this was much better as we were enjoying our rides in monsters jeeps.

I got a fantastic opportunity on the last day of my tour for another great expedition i.e. to visit the man made tunnel at Iceland’s second largest glacier Langjokull (The Long Glacier) which is only a 2 to 3 hour drive by road from the capital city of Reykjavik. Into the Glacier Tour was one of the best tours of my life.

I headed for Husafell, the woodland oasis of West Iceland and one of the oldest settlements in the area; it was a 2 hour drive from the city. Enroute I passed through the underwater sea tunnel highway, on reaching there I first had a local Icelandic lunch at one of the hotel located at Husafell town. After lunch I got into another car the pick-up of which was arranged from Husafell bus station as we had to go past Gravel Road right upto Klaki Base Camp from where the tour normally commences.

On arrival at the base I had a complimentary hot chocolate beverage and got my gears post that. This tour is operated with a specially modified snow truck on the glacier. I got into the monster truck which took us on the glacier, I got down at the entrance of the tunnel; the ride on the cracked glacier was absolutely stunning. I had an opportunity to experience something amazing, the beautiful blue ice tunnel at the heart of the ice cap glacier.

I had to put on the metal grippers over my shoes to avoid skidding inside the cave. There is also a snow theatre inside this glacier and I got a chance to sing one of my favourite songs there, the echo of the song could be heard all through the tunnel. The other tourists actually enjoyed the Hindi song that I sang.

Overall the entire Iceland tour was awesome, got to see and learn a lot of new things. I do wish to travel to Iceland again and discover what I missed.

For those travelling for the first time a few pointers to remember:

Please carry a jacket/hoody and rain-shield. Good pair of travel shoes for glacier tours. Also carry your cap, battery, charger, camera, extra copies of travel vouchers and receipts alongwith the itinerary. Your clothing the most important thing, the name of the country suggests it all so you do know what will be needed in your clothing section.

And please guys do all your travel bookings only through some trusted tour operator who is really experienced in Iceland tours or else just as the name suggests you will only end up seeing FIRE and ICE but no SPICE on your tour. For more details on group or customised Iceland tour packages you can visit www.trinityairtravel.com